Home | Blog | How the cost of upsizing varies across the UK

All of us spent more time than ever in our homes during the various lockdowns, which has made many people realise they’ve outgrown their space and it’s time to start looking into upgrading to a larger property. With home working set to become a main stay for many even post-pandemic, additional bedrooms that can be used as home offices are in demand.

Of course, investing to gain an extra bedroom varies in price depending on where in the UK you live, and our recent study revealed that the most expensive place to do this was Poole, with an eye-watering average cost of £517,818.

By contrast, Stoke-on-Trent in Staffordshire is the cheapest place to scale up, costing just £37,768, which is nearly 14 times cheaper than Poole. 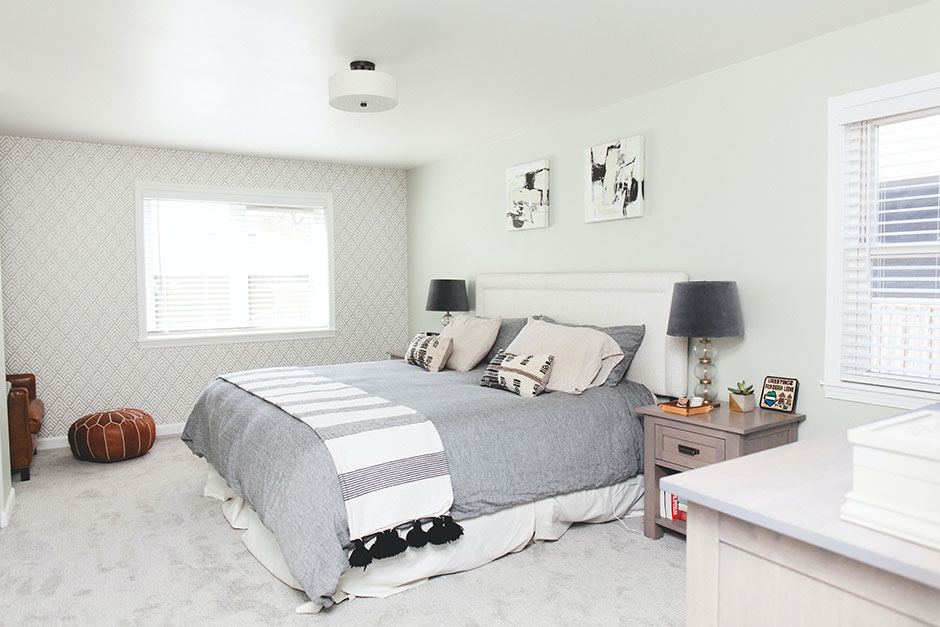 The ten most expensive places to upscale across the UK are: 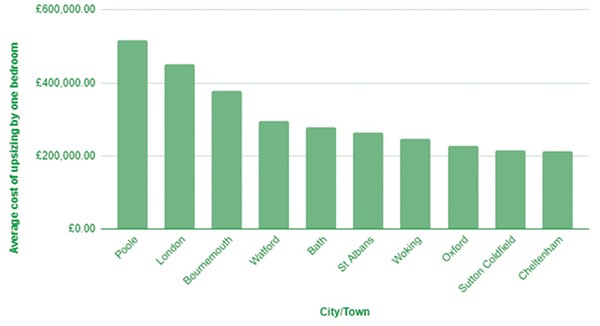 The ten cheapest places to upscale across the UK are: 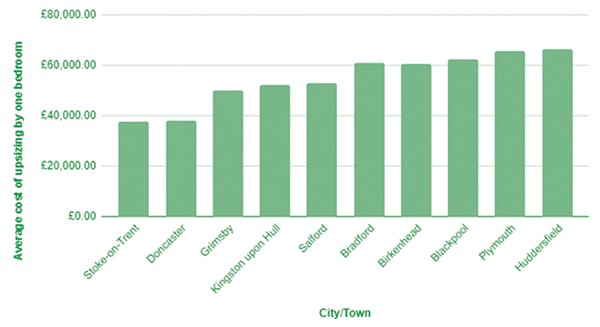 Unsurprisingly, London is the region that boasts some of the highest costs when it comes to upsizing, with the hefty £450,834 price tag of adding a bedroom on average, more than double that of the South West, which is the second most expensive, costing £202,496.

The most expensive regions in the UK to upsize are: 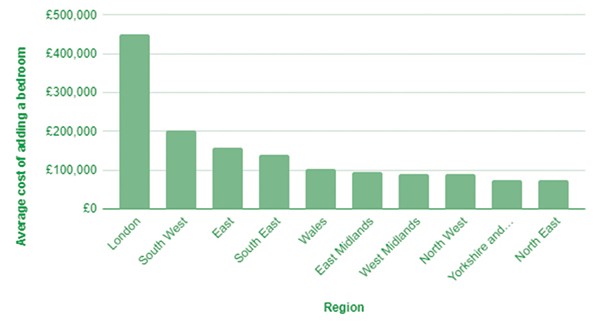 Outside of London, we have also looked at the most and least expensive places to upsize your property across all the regions of the UK. Have a look to see how much it would cost you.

The South West is the most expensive place to upsize your home outside of the capital, and across that region you’ll pay the most to add a bedroom in Poole, averaging out at over half a million (£517,818) to do so. Amazingly, for the price of just one bedroom, you could buy two brand new Ferraris.

This hefty price is nearly eight times more expensive that upsizing in Plymouth, where it’ll only cost you £65,678 to go up by one bedroom in house size, except if you’re looking to step up from a one- to a two-bed house, where Swindon (£43,793) ranks as the cheapest place in the South West.

In the East of England, it costs an average £158,696 to buy a property with one additional bedroom. However, residents of Watford live in the most expensive part of the region, paying way above the regional average at just under £300,000 (£294,439), a cost which could allow you to fully renovate your garden nearly 30 times. This is a stark contrast to those living in Peterborough, who would have to pay just £86,600.

The price of upsizing your home in the South East is £140,806 on average, while Woking is the most expensive town in the area, costing residents £245,918 to add a bedroom. When it comes to upgrading from a three to a four-bed house though, Oxford is the priciest (£252,540).

At the other end of the scale, the cheapest place in the South East to upsize is Gillingham, with an average price of just £81,692 to go up by one bedroom in house size.

In a region where it costs £102,635 to scale up your living space on average, Cardiff is unsurprisingly the most expensive location to do this, costing £112,830 for a standard household. Interestingly, although Swansea is generally the cheapest place to upsize in Wales (£90,117), it is actually the most expensive place to upgrade from a three- to four-bed house (£183,427).

Getting a house with an extra bedroom will cost you less than £100,000 on average in the East Midlands (£94,715) and this gets cheaper still for residents of Chesterfield, who can expect to pay just £82,122. The most expensive East Midlands location is the city of Nottingham, with an average cost of upsizing of £110,328 could get you ten luxury watches for the same price.

Moving west, it is marginally cheaper still to buy a bigger home, costing £91,221 on average, and the most expensive town across the region is Solihull, where it’d cost a house buyer more than double the regional average (£216,974) to buy a house with an extra bedroom. At the other end of the scale is Stoke-on-Trent, costing less than a quarter of Solihull prices at just £37,768, making it the cheapest place in the UK to upsize.

Buying a bigger house with an additional bedroom in the North West would set you back an average of £89,087 but this again is dependent on where you live. Stockport is the most expensive place in the region to upsize, costing £126,517 on average which almost doubles to £241,141 when looking to jump from a four to a five-bed house. By contrast, Salford is the cheapest, almost a third of Stockport’s average at £52,796 and it’s actually cheaper to buy a five-bed house over a four-bed house there.

Yorkshire and The Humber

If you’re looking to take the next step on the property ladder to a home with more space, you would expect to pay an average of £75,585 in Yorkshire and Humberside. Upsizing in the historic walled city of York is notably more (£128,251) whilst picking out a bigger home in Doncaster is considerably cheaper at just £38,224, the second cheapest location in the UK and that price difference would actually cover the average cost of an extension on that size of property.

Living in the North East will allow you to upsize your home for the lowest average price in the UK, costing just £73,968 across all house sizes. Darlington is the priciest location in the region, costing Brits £80,819 to buy a house with an extra bedroom whilst Middlesbrough is the cheapest, setting residents back £69,478.

If you’re looking to upsize or downsize your home, making that transition can often be time consuming and sometimes stressful. To ease this process, we have a removal system available across the UK. For more information, visit https://www.space-station.co.uk/removals